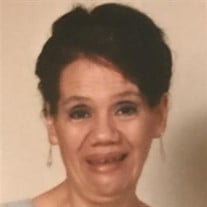 Zoraida Estrada, 72 years of age, from Brooklyn, New York passed away on October 13, 2019 at Orange Regional Medical Center in Middletown, New York. Visitation will be held on Saturday, October 19th during the hours of 2 pm to 6 pm at the Funeral Home. A Funeral Service will take place during the visitation. Zoraida was born in Toa Alta, Puerto Rico to Josefina Fuentes and Ricardo Estrada on March 10, 1947. She was a devout Catholic and cherished very dearly any time spent with her family. she is survived by her sister Mercedes and her brothers Norberto and Ruben, her daughter Gloria and her son Onelio, her granddaughters Chanelle and Gabriela, and her grandson James. Zoraida is also survived by her nieces: Aaliyah, Betsaida, Brenda, Celeste, Cristina, Crystal, Diana, Elizabeth, Gabriella, Gianna, Gina, Jeanette, Jessica, Lydia, Maria, Nadia, Najasha, Priscilla, Shirley, Tierney, Wilma, Yvonne, Zenaida, and Zenaya. She is also survived by her nephews: Achilles, Adonis, Angel, Anthony, Ariel, Brandon, Carlos,Gilbert, Gilbert, Gio, Hector, Hector, Jonathon, Jose, Leroy, Manuel, Miguel, Nickolas, Omi, Orlando, Pedro, Richie, Ronnie, Salvador, and Simon. Zoraida is preceded in death by her parents Josefina and Ricardo; her sisters Carmen, Elsa, Maria Estel, and Norma; her brothers Hector and Ricardo; her nieces Grizet and Maureen, and her nephew Cheo. Zoraida will be dearly missed as she was always kind, positive, and upbeat through any and all adversity. Anyone who was lucky enough to know Zoraida can testify to her good-natured heart and her warm smile. Now she is reunited with all of her family and friends that have passed on and though it is extremely heartbreaking to say goodbye, we should be saying "until we meet again" since we shall be reunited eth her again one day when we too are called to eternal life. The family wishes to extend their sincere gratitude to: the Orange Regional Medical Center staff - especially Dr. Murphy, Donna, Anne, and Maya (hospice care) and Gabriel and Chris of Pastoral Care, Park Manor Rehabilitation and Health Care, Access Supports for Living, and Martinez-Morse Funeral Home. The kindness and compassion shown by these organizations will never be forgotten.

Zoraida Estrada, 72 years of age, from Brooklyn, New York passed away on October 13, 2019 at Orange Regional Medical Center in Middletown, New York. Visitation will be held on Saturday, October 19th during the hours of 2 pm to 6 pm at the Funeral... View Obituary & Service Information

The family of Zoraida Estrada created this Life Tributes page to make it easy to share your memories.

Send flowers to the Estrada family.