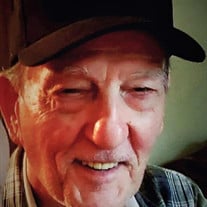 Vincent J. Lisanti Sr. (Vinny) was born in 1941 to parents Vincenzo (Jimmy) and Josephine (Josie) Lisanti. He resided in Rock Hill, NY, and passed away to meet his beautiful wife Katherine in heaven on December 11th, 2021. He was 80 years old. He was a one-of-a-kind, highly motivated person, who always kept himself busy and had a youthful energy about him. Vinny enjoyed spending time with his family, and throughout his life was often the loud and funny guy at the table who loved to talk and enjoy a good meal. He was always good with his hands and even into his senior yrs. would still work on his own cars. Born and raised a Brooklyn, NY boy who became a young man in the 50's and early 60's, he loved his doo wop music, singing A cappella, slick cars and spending fun times with Katherine (Who would later become his gorgeous bride). A little later in life he enjoyed harness racing, playing "the numbers", scratch offs and an occasional game of basketball in his son's driveway with his grandkids; and gramps would almost always win. Yes, he was always in good shape throughout his life, in fact, he split his own wood and stacked it, and then thought nothing of going over to his son’s house to help him do it all over again. He did this right up until the few weeks before his passing. He was proud of his Italian heritage and all the traditions that went with it and never missed a holiday gathering, especially when he was in the prime of his life in his middle-aged yrs., when an incredibly delicious large feast would be made by his loving mother Josephine (Josie) with assistance from his sisters and Katherine. Vinny spent most of his working life as a truck and limousine driver and loved to reminisce about all the different places he would travel to when making furniture deliveries or transporting passengers. You could not go anywhere in the tri-state area without him having some recollection of the time he traveled there in his truck and a memory to go along with it. Vinny was a loyal husband to Katherine, father, grandfather, dedicated brother to his 3 sisters and generally happy go lucky man. He will be sorely missed by so many! He is survived by his son Vincent and daughter in law Stacey, his grandkids Jessica and Gianni, his sisters Isabelle (Bella), Vincenza (Jeanne), Theresa (Tessie) and brother-in-law Frank Lomascolo as well as nieces and nephews Josephine & children, Marianne & children, nephew Joseph and Marie & Kariel. He was pre-deceased by his wife Katherine, brother Frank (Frankie), parents Vincenzo (Jimmy) & Josephine (Josie) and brother-in-law John DeJoseph. A public visitation will be held at Martinez-Morse Funeral Home in Middletown on Friday, December 17th from 4 PM to 8 PM and a Funeral Service at St. Joseph Church at 11 AM the following day. Messages of condolences may be left at DeWittFH.com.

Vincent J. Lisanti Sr. (Vinny) was born in 1941 to parents Vincenzo (Jimmy) and Josephine (Josie) Lisanti. He resided in Rock Hill, NY, and passed away to meet his beautiful wife Katherine in heaven on December 11th, 2021. He was 80 years old. He... View Obituary & Service Information

The family of Vincent J. Lisanti Sr. created this Life Tributes page to make it easy to share your memories.

Send flowers to the Lisanti family.