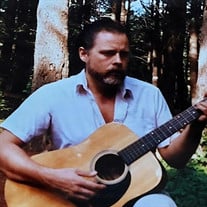 Timothy A. Selear, age 69, of Pine Bush, NY unexpectedly passed peacefully Tuesday, March 15, 2022 at his home. Born in Great Lakes, Illinois to the late Naval retiree Andrew Selear and Evelyn (Cole) Selear on December 12, 1952. Raised in New Orleans, LA, Norfolk, VA, Mahwah, NJ, and Highland Falls, NY. He spent most of his life here in the Hudson Valley, NY area. He attended Both Suny Orange (OCCC) & Suny Binghampton and earned an associates degree in Human Services. He served honorably in Germany in the US Army from '71-'74, as well as a 20 year career NYS Correctional Officer. In addition he was a lifelong musician performing professionally, since the age of 16, in various bands and solo projects. Most notable, the 40 years as Co-lead singer and guitarist of the local band Route 66 of Middletown, NY. He took pride in our area using his talents to write and record music about our towns and county. Survivors include: his wife Kathleen A. (Piccinini) Selear at home, daughter Rebecca A. Howell and her husband Daniel of Damascus, PA, son Jeffrey A. Selear of Walden, NY, son Sean A. Selear of Pine Bush, NY; grandchildren: Savanah, Krystyana, Gwendolyn, Brysen, and Christopher; brother Thomas Selear of Ulster County; cousin Patricia Hornak; and several neices, nephews, in-laws, and band mates (Ralphie B., Ralphie P., Fig, and Mikey). He is predeceased by both parents. Visitation will be held at DeWitt-Martinez Funeral & Cremation Services, 64 Center Street, Pine Bush, NY on Sunday, March 20, 2022 from 2-6 pm and Monday at 9 am. Funeral service will be held at the Infant Savior Church, Pine Bush, NY, followed by a burial at the Veterans Cemetery in Goshen, NY.

The family of Timothy A Selear created this Life Tributes page to make it easy to share your memories.

Send flowers to the Selear family.