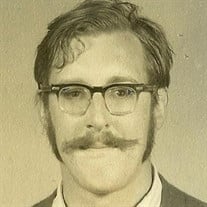 Robert Nicholas (Bob) Peay, 78, of Pine Bush, NY, passed away on October 10th, 2019 at Sapphire Nursing in Goshen, NY. Bob was born in Middletown, NY to Eleanor and Robert Peay on February 27th, 1941. He went to Middletown High School and graduated in 1958. He went on to earn a degree in English from Yale University in 1963, but not before embarking on a brief stint as a sports writer for the Times Herald Record in Middletown, NY. After graduating from Yale, he went on to earn a Master’s degree in education at New Paltz which helped shaped the course of his entire career. Bob quickly became a well-known fixture at Pine Bush High School, where he spent a span of 35 years teaching English, challenging the math department in friendly competition, running the senior class and leading graduation ceremonies (to name a few). Around town, he was a walking encyclopedia, with seemingly endless knowledge in history, literature and most especially sports trivia. Bob ran numerous sports pools throughout the years and continually fostered a fun competitive environment between all participants; he was well-known for organizing and consistently leading the charge with the start of each new season. He also volunteered for the Pine Bush Little League, was a member of the Lions Club and drove for Meals on Wheels during the majority of his retirement years. Bob is survived by his son, Joseph Peay of Indian Hills, CO, daughter-in-law, Gretchen Zimmermann also of Indian Hills, CO, sister, Eleanor Whittaker and her husband Rodney Whittaker of London, England, nephew and godson Christopher White of Connecticut, nephew Jerehmy White of New Jersey, nephew Matthew White of Connecticut, nephew Nick Whittaker of England, and niece Eleanor Whittaker Machin of England. He is preceded in death by his sister, Susan White, mother, Eleanor Peay and father, Robert H. Peay. Memorial donations may be made to Meals on Wheels America, mealsonwheelsamerica.org in memory of Robert. The family wishes to extend their gratitude to those who remained closest to Bob, especially during some of the more challenging moments of his final years, namely Thomas Bemont of Pine Bush, NY and Gregory MacAvoy of Pine Bush, NY; their contribution to Bob’s well-being and safety made each transition into each new phase as comfortable and peaceful as possible; words cannot express our thanks enough.

The family of Robert Nicholas Peay created this Life Tributes page to make it easy to share your memories.

Send flowers to the Peay family.