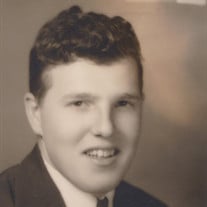 ROBERT E. LIVESEY October 20, 1926 - December 26, 2018 Middletown, NY Robert E. Livesey of Middletown, NY passed away peacefully on December 26, 2018 at the age of 92. He was born on October 20, 1926 in Bullville, NY to Charles Livesey and Susan Livesey-Blauth. In September of 1952 he married Margaret Eleanor Kelder, with whom he resided in Middletown, NY with until her passing in October of 2000. Robert is survived by his son, Richard Kenneth Livesey; his sister, Doris Schmidt, and his grandchildren: Richard, Amy, Matthew, Paul and Mike. He is predeceased by his brothers: Arthur Livesey, Grover "Uncy" Livesey, and Charles Livesey. Robert was a professional baker, who owned and operated a bakery at Clover Knoll Farms in Goshen from 1968-1985, and he was an avid stamp collector. He will be remembered by all who know him for his sense of humor, generosity, and easy going nature. The family would like to thank his nephews, Art and Dave Livesey, for the time spent with Robert, and assistance provided during his final years, and would also like to thank his doctor, Dr. Concertto Rametta, as well as his staff, and the staff at ORMC and Park Manor Rehabilitation.

The family of Mr. Robert E. Livesey created this Life Tributes page to make it easy to share your memories.

Send flowers to the Livesey family.