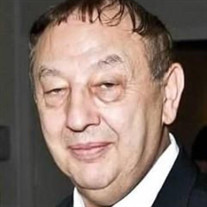 Richard Zagami, 78, of Middletown NY passed away peacefully into God’s hands on February 23,2021 at Garnet Health Medical Center in Middletown, NY. He was the Son of the late Samuel and Maria Zagami. Richard was born on April 6, 1942 in Bronx, NY. He graduated from James Monroe High School, Bronx NY, and began his lifelong career with Schildwatcher and Son’s Inc., Bronx NY. He met his wife the love of his life, Elizabeth M. Zagami through his best friend growing up. They moved upstate to Middletown NY where they built their life long home together. Richard and Elizabeth were married 53years and had 3 children, Samuel R. Zagami, Charles D. Zagami, and Mary A. Kadet. They have 4 grandchildren, Joseph J. Kadet, Sophia E. Kadet, Alexis M. Zagami, and Mia G. Zagami. Richard was a very active member of TOPS club, Wallkill Seniors, Mulberry House and non-denominational Christian Church. He also enjoyed Bible Study, Senior Olympics, Zumba and line dancing, as well as card playing with his close friends. He was a very outgoing, spiritual wonderful, thoughtful person and made friends everywhere he went. He loved life and all of its adventures. Richard is survived by his wife, children, grandchildren, sister Rosalie Martens, and brother John Zagami, as well as many nieces, and nephews. He pre-deceased by his parents, sister Mary Fermonte, sister Jeannie Sullivan, and Brother Anthony Zagami. There will be no services at this time due to pandemic, a memorial service will be held at a later date for all to attend.

Richard Zagami, 78, of Middletown NY passed away peacefully into God&#8217;s hands on February 23,2021 at Garnet Health Medical Center in Middletown, NY. He was the Son of the late Samuel and Maria Zagami. Richard was born on April 6, 1942... View Obituary & Service Information

The family of Richard Zagami created this Life Tributes page to make it easy to share your memories.

Richard Zagami, 78, of Middletown NY passed away peacefully into...

Send flowers to the Zagami family.