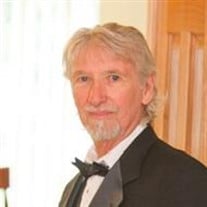 Richard John (Ric) Skinner, 70, of Pine Bush, NY passed away on March 2, 2020 in Middletown, NY. Ric was born in Newburgh, NY to Richard C Skinner and Marion Skinner on April 21, 1949. He attended Middletown High School and graduated in 1966. He also attended Orange County Community College and Albany Business College. He went on to work for Orange and Rockland Utilities, Inc. as Records Manager for over 37 years. During this time, he also pursued his dream of making his own music. As an extraordinary musician, a spectacular guitarist and singer/songwriter, this led him to create his own band, Ric Skinner Band - Lot 14 in 2005. Ric's prior experience during the great 1960's as a full time musician in "The Diplomats" allowed him the unique experience to be on stage with some of music's greatest artists of the time including "The Crystals", "The Ronnettes" and "The Shirelles" which inspired him to include "Baby It's You" and "Be My Baby" on his first record release in 2006. These experiences truly inspired him as a songwriter and in 2014, Lot 14 released the all new original record "Transition".."Transition” is a 9 track album released by Ric Skinner’s “Lot 14 Band”. The band offers an eclectic balance of music transcending time as the listener hears sounds very reminiscent of the "The Ventures" surf music in their performance of Qlean. The album covers several other styles of music ranging from the aggressive rock sounds of "Let It Ride"; the blues styling of "What's Ya Feeling"; a hint of country in "Midnight Lady”; and the softer tones of the band’s music in “Wow”. He loved to play his original music out at many different local venues in the Hudson Valley. He also enjoyed bowling, playing golf and fishing and camping at RIO for many years. Ric also was a proud veteran who served during the Vietnam era. Ric is survived by his wife, Karen Skinner, children, Jeremy Skinner, Lauren Hilaire, Justin Skinner, Anthony Skinner, two grandchildren Sean and Viviana and many cousins. Everyone who knew Ric knew that after his family, his music meant everything to him. In lieu of flowers, please consider purchasing his music in remembrance of him at one of the links below: https://music.apple.com/us/album/transition/938722243 https://www.amazon.com/Ric-Skinner-Band-Lot-14/s?k=Ric+Skinner+Band+Lot+14&rh=n%3A163856011 https://store.cdbaby.com/cd/ricskinnerslot14band Also, please consider donations in his name to the American Cancer Society: https://donate3.cancer.org/?campaign=search&&utm_source=google&utm_medium=cpc&utm_campaign=NB+-+Donations%3A+General+-+BMM&utm_term=%2Bcancer%20%2Bdonations&utm_content=km6g6gnj_dc%7cpcrid%7c388656530784%7cpmt%7cb%7cpkw%7c%2Bcancer%20%2Bdonations%7cslid%7c%7cpgrid%7c59742786232%7cptaid%7ckwd-27320378831%7c&gclid=EAIaIQobChMI1OqGvs6E6AIVApyzCh2O6AIQEAAYASAAEgL3afD_BwE Funeral service and a mass will be held at St. Joseph’s Roman Catholic Church on Monday, March 9th at 11am. Burial will follow at St. Joseph's cemetery, Cottage Street, Middletown, NY. Visitation will be held at Martinez-Morse Funeral Home, Railroad Ave., in Middletown, NY on Sunday, March 8th from 1pm to 5pm.

The family of Richard J Skinner created this Life Tributes page to make it easy to share your memories.

Send flowers to the Skinner family.