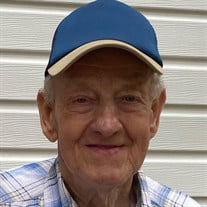 Richard William Paffenroth April 7 1937 - March 7 2022 Rich, a lifelong resident of the area, passed away unexpectedly at home. Rich was the son of Adam and Mary, nee Parker. He was 84 years old. Rich led a long and eventful life. He was a maintenance supervisor at Imperial Schrade, Inc. in Ellenville, NY for 40 years before retiring. While working at Schrade, he also ran his own trucking company. He delivered knife parts from Ellenville, NY to other Schrade facilities in neighboring states; while also helping many friends move South, and delivering trailer loads of hay, sawdust and animals to local farmers. Rich was a member and President of the Pine Bush School’s chapter of the FFA. Over the years he raised cows, pigs, horses, ducks and chickens on his small piece of land. He raced motorcycles all over the Northeast, as well as being a flagman at Orange County Speedway for the AMA races held there. He co-owned the first Indian motorcycle shop in Pine Bush before a terrible fire burned it down. He took part in bowling and pool leagues, and he was an avid NASCAR enthusiast. In retirement Rich just couldn’t sit still, he worked at the Howie’s Car Wash until it closed. He would drive into town everyday to get “his” tea from McDonald’s, and to chat up the ladies who worked there. He would make his daily visit to the post office as well. He was always tinkering or fixing something at his house. He had a great affinity for gardening and he would spend hours tending to his plants and then deliver veggies to all of his friends. You knew you were in good with Rich if you received vegetables from his garden. Rich donated his time and expertise to the pavilions at Verkeerderkill Park by completing the wiring and electrical panel work. Rich will be fondly remembered by his son, Darren, with his wife, Lisa, and their daughters, Aubrey and Amber; his daughter, Heather Vasquez, with her husband Richard, and their children, Richard, Brittany and Alexander; as well as his daughter, Danielle Pappalardo and her husband, Scott. He is missed by his furry love “kitty kitty”. He is survived by his sister, Joan DeRonde McCarson, and his brothers, John, Bob, and Tom. Rich was predeceased by his wife, Linda(Brownell); his sister, Ruth(Haber-Bignell); and his granddaughter, Gabrielle Vasquez. The family requests a donation to your local animal shelter or FFA chapter in lieu of flowers in Rich’s name. They also invite you to a gathering to remember and share memories of Rich at Larry’s Chinese Restaurant and Bar in Pine Bush from 5-8PM on April 7, 2022.

Richard William Paffenroth April 7 1937 - March 7 2022 Rich, a lifelong resident of the area, passed away unexpectedly at home. Rich was the son of Adam and Mary, nee Parker. He was 84 years old. Rich led a long and eventful life. He was... View Obituary & Service Information

The family of Richard William Paffenroth created this Life Tributes page to make it easy to share your memories.

Send flowers to the Paffenroth family.