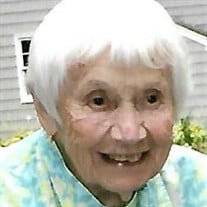 Mary Schneller, 96, of Storrs, CT, formerly of Pine Bush and New Paltz NY, beloved wife, mother, grandmother and great-grandmother passed away Wednesday, October 5, 2016. Born in New York City, January 10, 1920, she and her family returned to their native Hungary when she was 6 months old. She came back to New York in 1938 at the age of 18. She married her late husband, Carl Schneller, in 1944. Carl passed away in 1978. Mary is survived by two children, Carol Powell and her husband John of Manchester, CT and Louise Semenyck and her husband Peter of Woodstock, CT. A loving grandmother and great grandmother known as “GG”, she will be missed by her grandchildren and their spouses, John G Powell and his wife Sarah Bakulski, Nicholas Semenyck and his wife Nicole, Jennifer Powell and her fiancé Nathan Long, Cary Garcia and her husband Jesus, and her six great-grandchildren Cruz, Cian, Karl, Aine, Nina and Jada. She is also survived by many other loving relatives and friends. A wonderful cook, Mary taught her children and grandchildren to make and appreciate all the best of Hungarian and Austrian cuisine. Known also for her soups, her grandchildren thought that she could make soup “from a rock”. The family wishes to extend their sincere thanks for the care and kindness shown by the staff at Windham Hospital, Willimantic, CT and the staff at Mansfield Center for Nursing & Rehabilitation, Mansfield CT. While she was not in either place for an extended period of time, the efforts to make Mary comfortable are deeply appreciated. The family would also like to express thanks to the staff and residents at Juniper Hill Village in Storrs, CT, for their friendship to Mary (“Mary the Walker”), which made the 5 years she lived there so enjoyable. Relatives and friends may join the family for a funeral service on Saturday, October 15 from 11-1 PM at the DeWitt-Martinez Funeral Home 64 Center St. Pine Bush, NY with the burial to immediately follow at New Prospect Cemetery Rt. 52 in Pine Bush. Donations in Mary’s memory can be made to the Mansfield Fire/Ambulance Dept. 4 South Eagleville Rd. Mansfield, CT 06268.

The family of Mrs. Mary Schneller created this Life Tributes page to make it easy to share your memories.

Send flowers to the Schneller family.