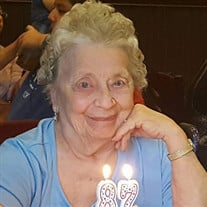 Martha B. Healy (nee Webber) September 17, 1929 – April 10,2020 Middletown, NY It is with profound sadness that the children of Martha Healy announce the passing of our Mother from this world to the next. Born in Middletown, NY to Richard and Elsie Webber, she was the eldest of eleven children. On April 18,1954 (Easter Sunday) she married S. Gardner (Butch) Healy, the love of her life. No matter what day Easter fell on, Dad said that was their Anniversary. Together, they raised Donna, Carol, Daniel, Bruce, Stephen, Charles and Gordon. They had been married for 59 years when he passed away in 2013. Ma worked as a crossing guard for the Middletown Police Department until she and Dad retired in 1996; at that time, they moved to North Carolina where she made several good friends. When we lost Dad, we brought Ma home to live with Donna, Granddaughter Jennifer and Great- Grandson Brent, with whom she had a special relationship. Ma was a member of the Washington Heights Ladies Auxiliary and was extremely proud of all of her family members who are in the Fire Dept. She was so excited to attend every parade where if any trophies were awarded it was HER trophy. She was WHFD’s biggest fan. Left to cherish her memory are Donna, Jennifer, Todd and Brent at home and Donna’s son Daniel (Kelly); Carol, her sons Raymond (Crystal), Richard (Patti), and Joseph; Daniel (Karen) and his son Craig (Min); Bruce; Stephen (Jackie) and his daughter Marilyn; Charles (Lisa), his daughter Lisa and sons Darren, Thomas and Steven; and Gordon (Lynn) and his daughters Heather and Alexis. In addition, she is survived by several great-grandchildren, siblings Charles (Gisela) Webber, Harold (Pola) Webber, David (Linda) Webber and Katherine Henderson, two cousins, numerous nieces and nephews and her extended “Family” (you know who you are). In addition to being predeceased by her parents and our Dad, Ma was predeceased by brothers William, Raymond, and Richard, sisters Elsie, Margaret and Dorothy, and grandson Robert Edwards. Services will be held private due to the COVID occurrence, with burial at Circleville Cemetery, Circleville, NY. A memorial service will be held at a later date. Arrangements are under the direction of Martinez-Morse Funeral Home. Messages of condolence may be left at DeWittFH.com. In Lieu of flowers, donations can be made to the Washington Heights Fire Company in her Memory.

Martha B. Healy (nee Webber) September 17, 1929 &#8211; April 10,2020 Middletown, NY It is with profound sadness that the children of Martha Healy announce the passing of our Mother from this world to the next. Born in Middletown, NY to Richard... View Obituary & Service Information

The family of Martha Bertha Healy created this Life Tributes page to make it easy to share your memories.

Send flowers to the Healy family.