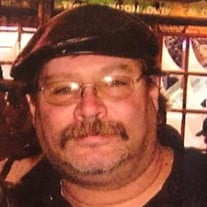 Louis Tripido, 58, died at home in Pine Bush, NY, on 2/1/2022 following a diagnosis in September 2021 of cirrhosis with subsequent liver cancer which led to recent Sullivan-Orange Hospice care until his passing. Born on November 4, 1963, to Louis Jr. and Hannelore Moell Tripido, Lou was raised in Oradell, NJ and graduated in 1981 from Riverdell Regional High School. He married Vicki Ramie on August 16, 1986, in Ogdensburg, NY. The couple first lived in Middletown, NY before moving to an eight and a half acre wooded property with a stream near Walker Valley/Pine Bush to raise their family and many pets. Lou retired in November 2020 from the New York State Department of Corrections after 26 years of service from the Otisville Correctional Facility. He also served many years as the Animal Control Officer for the Town of Mamakating. He had previously worked at Midas Brake Shop and as a mechanic at Honda/Accord in Middletown, NY.. He was a working volunteer for many years as well as a past officer for Waalkill Engine Co. #6 of the Middletown Fire Department and actively participated in their events including the yearly Turfler softball tournament in running the beer truck as well as the firemen's parades and other fundraisers. Lou enjoyed socializing with his many friends at their homes and at Jimmy Johns bar. "Back in the day", he brought his family to big group camping trips at Winding Hills Park, held popular weekend long pig roasts at his home, and hosted get-togethers for family and friends over the years in his basement man cave. He was a NASCAR fan, a hunter, and a Harley-Davidson Fat boy motorcycle rider. Lou and Vicki liked to travel to various luxury Bed & Breakfasts and Air Bnb destinations as well as vacation in Ogunquit, Maine. He is survived by his wife of 35 years, Vicki, and his three daughters, Kacy and her boyfriend Nick Muller of Pine Bush, NY, Sarah and her fiance, Chris Pisano of Walden, NY, Sydney and her fiance, Justin Vazquez of Nanticoke, PA as well as his father Louis Jr. and his wife Frances Henry Tripido of Allentown, PA; sister Holly and her husband Rob Pagano of Oradell, NJ; brother Bruce and his wife, Paula Tripido, and nephews Perry and Gavin of Ridgewood, NJ; Uncle John and Aunt Lorraine Gallagher from New Hampshire; Aunt Renate Messina and her husband, George Lavecchia of East Hanover, NJ, and his sister-in-law Laurie Ramie of Callicoon, NY . His mother, Hannelore and grandparents predeceased him. Cremation arrangements were handled by DeWitt-Martinez Funeral and Cremation Services. Donations in Lou’s memory may be made to Wallkill Engine 6 Fire company of the Middletown Fire Department at 10 Wallkill Ave. Middletown, NY. A Celebration of Life gathering with Firemen's service and buffet luncheon will take place on Sunday, February 20th at the Middletown Elks Lodge located at 48 Prospect Street from 1 pm to 5 pm.

Louis Tripido, 58, died at home in Pine Bush, NY, on 2/1/2022 following a diagnosis in September 2021 of cirrhosis with subsequent liver cancer which led to recent Sullivan-Orange Hospice care until his passing. Born on November 4, 1963, to... View Obituary & Service Information

The family of Louis "Trip" Americo Tripido III created this Life Tributes page to make it easy to share your memories.

Send flowers to the Tripido family.