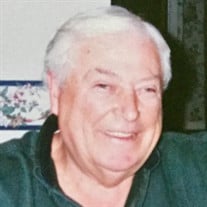 Joseph P. Fox Sr. (A.K.A. Duds), 89, of Pine Bush, New York passed away peacefully at Sapphire Nursing Home in Goshen, New York on Sunday August 5th, 2018. Born in the County of Westmeath, Delvin Ireland Joe came to the U.S. in 1950 and later served in the U.S. Army during the Korean War. He met Florence Nee Talty in Brooklyn, New York and they were married in 1958. In the 1960’s, they lived in Valley Cottage, New York. During the 1970’s, they lived in Pine Bush, New York where he owned Pine Bush Plumbing and Heating. Later in the 1980’s they lived in Nanuet, New York. Joe was a man of many trades. He was the owner of the Celtic Inn in San Diego, California, owner of Walden Liquors, owned and operated a Yellow Cab in N.Y.C., owned Hudson Valley Car Service and Hudson Valley Home Inspections; and he also bought and flipped numerous real estate properties. In 1999, Joe married Karen DeLuca. Joe was a past member of the A.O.H. and the Knights of Columbus. He was a founding member of the Friendly Sons and Daughters of St. Patrick, and founding member of the Irish Cultural Center in Blauvelt, New York. He is survived by his wife of 19 years Karen Fox; his son Peter, wife Janet, granddaughter Danielle, and grandson Ian Fox of Hamburg, New Jersey; his stepson Chris, wife Ellen, granddaughters Kailey, and Emily DeLuca of North Carolina; his stepdaughter Kim, husband Jay, grandson Mason, and granddaughter Kelsey Horner of Oklahoma; daughter-in-law Annalisa, granddaughters Caitlin Thompson (husband Tyrik) and Elizabeth Fox of Scottsdale, Arizona; and daughter-in-law Anne O’Malley and granddaughter Christina Fox of Nanuet, New York. Joe was predeceased by his first wife of thirty-five years Florence Nee Talty Fox, his sons Joseph Jr., and Patrick Fox. His siblings Eileen, Michael, Nancy, Maisie, and Patrick also predeceased him. There will be a funeral service in memory of Joe’s life on Thursday, August 9, 2018 at 11 a.m. at Sacred Heart Church in Monroe, New York. In lieu of flowers, memorial contributions can be made in Joe’s name to Hospice of Orange and Sullivan or the Pine Bush Area Public Library, Pine Bush NY.

The family of Mr. Joseph P. Fox Sr. created this Life Tributes page to make it easy to share your memories.

Send flowers to the Fox family.