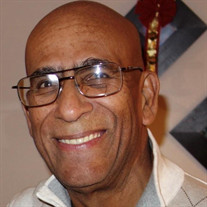 Jose Fernando Martinez, 75, passed away peacefully at home with his family by his side. He was the husband of Ada Irma Martinez. They shared over 50 loving years of life together. Born in Santo Domingo, Dominican Republic, he was the son of Jose Jesus Martinez and Altagracia Cordero. At the age of 16, Jose moved to NYC with his father and brothers in search of the American Dream. After owning several bodegas in the Bronx area, he became a piano stringer for Steinway Piano, Astoria, NY for over 30 years. An expert in his field, Jose worked on the piano that entered the White House during the Jimmy Carter Administration and appeared in many school textbooks on the subject. Jose will be remembered for his smile, patience, love, and caring personality. He enjoyed playing paddleball in his early years in Van Cortlandt Park and in many city tournaments. He also loved playing dominoes and the company of his family. Jose spent his retirement years in Sebring, FL with his wife and was surrounded by close family. He loved living in the Sun n’ Lakes community and made many great friends during his years there. He is survived by his wife Ada Martinez, his sons Robert (Jennifer), Tony (Yaniris) and Christopher (Raquel), his grandchildren Diego, Taina, Ariana, Jolina, Mariano, Maximus, Valentina, Gabriel, and Viviana, his mother Altagracia Cordero, his sister Rosemary (Humberto) Almanzar, many cousins, nieces, nephews, and many more family and friends. He is predeceased by his brothers Jose Miguel “Chi-Chi” Martinez, Jose Guillermo “Bobby” Martinez, and his father Jose Jesus “PiPi” Martinez. Visitation will be held at Stephenson-Nelson Funeral Home on Wednesday, August 4 from 3:00-6:00 pm. Jose will be flown to his son’s funeral home, Martinez-Morse Funeral Home, Middletown, NY. Visitation will be on Sunday, August 8 from 2:00-4:00 pm and 6:00-8:00 pm. The funeral mass will be on Monday, August 9 at 11:00 am at St. Joseph's Church in Middletown, NY. Burial will follow at St. Joseph’s Cemetery, Middletown, NY. In lieu of flowers, the family would like donations made in his honor to the National Kidney Foundation of Florida. Messages of condolences may be left at www.DeWittFH.com

Jose Fernando Martinez, 75, passed away peacefully at home with his family by his side. He was the husband of Ada Irma Martinez. They shared over 50 loving years of life together. Born in Santo Domingo, Dominican Republic, he was the son of... View Obituary & Service Information

The family of Jose Fernando Martinez created this Life Tributes page to make it easy to share your memories.

Jose Fernando Martinez, 75, passed away peacefully at home with...

Send flowers to the Martinez family.