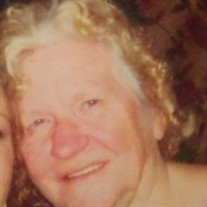 Joan Elenore Bakewell, of New Hampton, NY passed away at Orange Regional Medical Center on November 12, 2018, she was 82. Born December 4,1935 in Ellenville, NY to Mabel (Vanwagner) Irwin and Clarence Irwin. Joan loved entertaining and having gatherings with family and friends. She also loved cooking ,baking pies and enjoyed going to yard sales and having them. She also liked going to flea markets, sight seeing, and doing yard work, especially raking leaves and picking dandelions. She loved music, dancing and enjoyed going to socials and mingling with others. Joan was a huge animal lover, especially butterflies. Joan is survived by her husband of 19 years, Jeffrey Bakewell, her daughter Tanya Costello and grandson Joseph Costello , all at home. Joan had 10 kids, 5 girls: Janet Romer, Joanna Cottrill, Marie Schoonmaker, Georganna Romer. And 5 boys: Michael Romer, Mark Romer, George Romer, Ronald Romer, and Rodger Romer. She also is survived by 19 grandchildren, 17 great grandchildren, and 2 great-great grandchildren as well as several nieces and nephews. Joan also has 5 siblings Barbara Wright, Katherine Hertle, Janet Jackson, Thomas Irwin, and Kenneth Irwin. Joan also has many Children that she became a mom too, and took in as her own over the years. She was a very special lady and was loved by many. Joan was predeceased by both her parents 3 children and one sibling. A visitation will be held on Sunday November 18, 2018 from 3pm-5pm at Martinez-Morse Funeral Home, 33 Railroad Ave., Middletown, NY 10940 A celebration of life will be held at a later date. In lieu of flowers, donations can be made to the Alzheimers Association in Joans’ name. Messages of condolences may be made at www.morsefuneralhome.com

The family of Mrs. Joan Eleanore Bakewell created this Life Tributes page to make it easy to share your memories.

Send flowers to the Bakewell family.