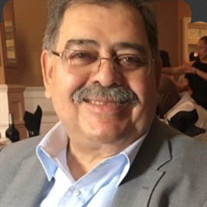 Jesus Manuel Rodriguez, 70, of Yonkers, New York, known to family and friends as Chuito, was welcomed into the gates of Heaven unexpectedly on April 5th, 2020 at Lawrence Medical Center. Chuito was born in Caguas, Puerto Rico to Maria and Rafael on December 25th, 1949. Chuito was the third of five of siblings, Ramon, Rafael, Maria, Joaquin and Antonio. Chuito worked very hard for many years to support and provide for his large family as a Butcher. He loved and enjoyed camping in his RV trailer, taking family vacations, hunting, shooting at the range with his children, traveling with his wife, playing lotto and cooking for huge family gatherings. But most importantly, Chuito’s love for his huge FAMILY was unconditional. Chuito is survived by his wife Margarita of over 30 years and his 12 children who will forever all hold a special place in his heart, Jose, Jesus Jr, Hector, Victor, Madeline, Jesus lll, Robert, Carlos, Nydia, Alma, Edward and Coqui. He is also survived by 28 grandchildren and 19 great-grandchildren. Chuito is pre-deceased by his Parents and his brother’s Antonio and Rafael. The Rodriguez Family lost a Rock, a Giant, a Hero and they would like to thank everyone for their overwhelming love and support during this difficult and unexpected time. A Memorial Service to Honor Jesus Manuel Rodriguez will be held at a later date. ****Due to COVID19 New York State Regulations and Laws have prohibited Flower Shops from being opened. We thank you for your thoughts and generosity during this difficult time but please do not attempt to purchase flowers. A Memorial Wake Service will be done in Honor of Jesus Manual Rodriguez at a later date and announced by the Rodriguez Family. We Thank You Again ❤️

Jesus Manuel Rodriguez, 70, of Yonkers, New York, known to family and friends as Chuito, was welcomed into the gates of Heaven unexpectedly on April 5th, 2020 at Lawrence Medical Center. Chuito was born in Caguas, Puerto Rico to Maria and Rafael... View Obituary & Service Information

The family of Mr. Jesus Manuel Rodriguez created this Life Tributes page to make it easy to share your memories.

Send flowers to the Rodriguez family.