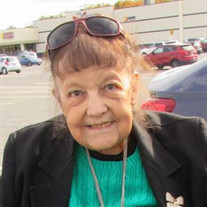 Jeannette J. Tiess, 86, of Middletown, New York, passed away on April 8, 2020, in Orange Regional Medical Center, Middletown, New York. Jeannette was born in the Bronx to Raymond and Josephine Figueroa on January 10, 1934. Jeannette was a devoted wife to husband Robert J. Tiess, Sr. (born May 31, 1932), who she married on February 10, 1952. She worked for a while as a typist and later became a dedicated homemaker. Jeannette delighted in many things, from the artistic to the intellectual and beyond: classical and contemporary music, jazz, opera, ballet, art, literature, literary criticism, poetry, mythology, philosophy, cinema, musicals, animations, documentaries, performing arts, and more. She also found much joy in various crafts, cooking, gardening, holiday decorations, angels, butterflies, playing games and puzzles on and off the computer, dressing up, going on outings of all kinds, and meeting new people wherever she went. Jeannette was a great listener, a generous and loving person, as well as a lifelong inspiration and best friend to her son, with whom she lived. Above all, she prized her Christian faith, maintained a wonderful sense of humor, and savored life to the fullest. Jeannette is survived by her son, Robert J. Tiess, Jr., and daughter Barbara, both of Middletown, New York.

The family of Mrs Jeannette J Tiess created this Life Tributes page to make it easy to share your memories.

Send flowers to the Tiess family.