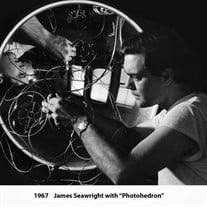 James Lemuel Seawright died February 12, 2022, of complications from Parkinson’s disease. He was born in 1936 in Jackson, Mississippi. Recognized as one of the foremost technological artists since the late 1960’s, his works are in the permanent collections of the Museum of Modern Art, the Metropolitan Museum of Art, the Whitney Museum of American Art, the Guggenheim Museum, the Rose Art Museum at Brandeis University, the New Jersey State Museum at Trenton, and other museums throughout the world. Seawright received numerous commissions including a large two wall mirror sculpture at the Boston International Airport and an interactive light and sound sculpture at the Seattle-Tacoma Airport. He received numerous awards including an award from the American Academy of Arts and Letters. Most recently his work “Searcher” was included in the exhibition “Programmed: Rules, Codes, and Choreographies in Art 1965-2018” at the Whitney Museum. (September 2018-April 2019) His works “Twins”, “Gemini”, and “Lyra” were part of the exhibition “Uncharted: American Abstraction in the information Age” at the Hofstra University Art Museum (January-June 2020). Seawright served as a professor at Princeton University, and as director of the Visual Arts Program for many years. He retired in 2009. James Seawright married Mimi Garrard in 1960. They collaborated throughout their careers. They received a lifetime achievement award from the Mississippi Institute of Arts and Letters in Jackson, and numerous awards for their virtual sculptures. Their group show, “Mutual Muses” was shown recently at the Clara Eagle Gallery at Murray State University in Kentucky, and at the Ewing Galley of Art and Architecture at the University of Tennessee. Seawright is survived by his wife, Mimi Garrard, his son James Andrew Seawright, his daughter in law Nicole Seawright, his grandson Samuel Seawright, his granddaughter Hayden Seawright, his sister- in- law Rebecca Seawright and numerous cousins, nieces, and nephews.

James Lemuel Seawright died February 12, 2022, of complications from Parkinson&#8217;s disease. He was born in 1936 in Jackson, Mississippi. Recognized as one of the foremost technological artists since the late 1960&#8217;s, his works are... View Obituary & Service Information

The family of James Lemuel Seawright Jr. created this Life Tributes page to make it easy to share your memories.

Send flowers to the Seawright family.