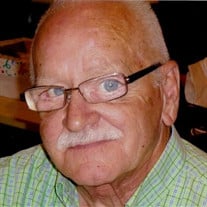 Harry Alden (Ted) Leeper Sr, 76, of Campbell Hall passed away on January 30, 2019 at Park Manor Nursing Home in Middletown,NY . Harry was born to Wilhemina Brine and William Randolph Leeper on December 15, 1942. Harry was an Army Veteran who served his country during the Vietnam era. He later worked has a warehouse manager for RAL until he retired. He was a member of the Wallkill American Legion post 1181, the Fraternal Order of Eagles, and past Commissioner and Fire Police Officer for the Mechanicstown Fire Co. He is survived by his loving companion, Dixie Haddan of Campbell Hall, NY; his children Joanne Leeper of Bloomingburg, NY,Dawn Leeper; Ralph Dillon and wife Vivian of Ardsley, NY; Ann Leeper of Newburgh, NY; Harry Leeper Jr. and wife Doreen of Bloomingburg, NY and Harvey Leeper of New Windsor, NY; loving sister Glenda Kozireski, of Wallkill,NY and sister in law Thelma Leeper of Port Jervis, NY; 10 Grandchildren and 6 Great-Grandchildren and several nieces and nephews. Harry was predeceased by his wife Rose Marie, brothers Carl and Randy Leeper and brother in law Raymond Kozireski. Visitation and service will be held at Martinez-Morse Funeral Home, 33 Railroad Avenue, Middletown, NY from 10:00am to 1:30pm on Monday February 4, 2019. Burial will take place immediately after at the Orange County Veterans Cemetery on Craigsville Road, Goshen,NY. The family would like to thank the nurses and staff for all their love and support at Park Manor Nursing and Rehabilitation. In lieu of flowers, a contribution may be made to a charity of ones choice. Messages of condolences may be left at www.morsefuneralhome.com

The family of Mr. Harry (Ted) A. Leeper Sr. created this Life Tributes page to make it easy to share your memories.

Send flowers to the Leeper family.