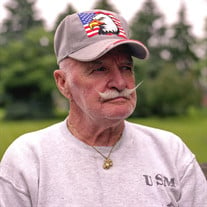 Harold R Holmes, age 90 passed away 10/3/2020 in Goshen, NY. He was born at home in Walden, NY on June 2, 1930, the son of the late Nellie Moran Holmes and Ernest Holmes. He served his country in the US Army, serving in the 4th infantry division in Germany. He re-enlisted in the Marines Corps and served in the 1st Marine Division. He was a Korean War Veteran. He worked for Coca Cola in Newburgh and the Middletown Psychiatric Ctr, retiring from New York State. Harold loved fishing, animals, spending time at LBI, and watching sports, especially his Philadelphia Eagles. He was an Army-Navy football fan, attending many games over the years in Philadelphia. He had many nicknames, Gunny, Q Ball, Popeye, Poppa, which he was fondly known by. Harold always had a great sense of humor, and loved talking with people, friends and strangers alike. He would never miss a chance at a conversation. He is survived by his children, Jeffrey R Holmes and wife Edan, Walden, NY, William L Holmes, Town of Newburgh, NY, Rene Holmes-Naclerio, Town of Newburgh, NY, and stepson, Steven Vavricka and his wife Adrienne, Middletown, NY, his sister, Vivian Holmes Ronk and her husband Bill, Mauston, Wisconsin, grandchildren, William, Annie, Michael, Melissa, Brittany, Andrea, John, Matthew, Christopher, Vincent, and Lauren, 4 great grandchildren, several nieces, nephews, and cousins. He was predeceased by his wife Jeanne Vavricka, his daughter Robin R Holmes-Scott, son in law, George M Naclerio, stepson Jay Vavricka, his brothers, Ernest and Thomas “Harpy” Holmes. Visitation will be at Martinez- Morse Funeral Home, 33 Railroad Ave, Middletown, NY, on Wednesday, October 7, from 4 to 8pm following Covid 19 guidelines. There will be a funeral service at 5:00 pm. Burial will be with military honors at the Orange Co Veterans Memorial Cemetery in Goshen, NY, Thursday, October 8 at 10am. Memorial donations in lieu of flowers may be made in Harold’s name to the Walden Humane Society or the Marine Corps League Det #249 of Greater Newburgh, 6 Temple Hill Rd. All arrangements have been made by the Martinez-Morse Funeral Home. www.dewittfh.com

Harold R Holmes, age 90 passed away 10/3/2020 in Goshen, NY. He was born at home in Walden, NY on June 2, 1930, the son of the late Nellie Moran Holmes and Ernest Holmes. He served his country in the US Army, serving in the 4th infantry division... View Obituary & Service Information

The family of Harold R Holmes created this Life Tributes page to make it easy to share your memories.

Send flowers to the Holmes family.