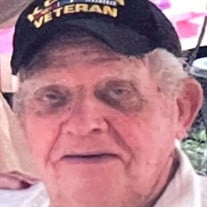 George Sargent of the Town of Greenville, NY, passed away on Tuesday, February 1, 2022, from a short bout with Covid. He’d just turned 89 years old. He was the son of the late Andrew Sargent and Amelia MacWilliams and was born in Middletown, NY. As a young child his family moved to Scranton, PA and then they moved back to Middletown, NY where George graduated from Middletown Highschool. He then met his first wife Geneva Odell and married her in 1951. One and a half years later he was inducted into the army- 1953. He was a PFC who worked in the motor pool as a truck driver in the Korean War. In 1991 Geneva passed away and the following year he met and married his second wife, Rita Lamando, who predeceased him in 2020. George worked as a courier for the Middletown Board of Education. He also worked as a Polling Inspector in the Town of Greenville for the Board of Elections. George was also a volunteer firefighter for the city of Middletown, NY. He loved playing golf and was an avid hunter and fisherman. George and his second wife also traveled the east coast from Maine to Florida, then to Houston, Texas. He is survived by his stepchildren; Frank Lamando Jr. (Jean) of Westtown, NY, Fleuraine Lamando Sniffen (Larry) of Greenville, NY, Fred Lamando (Connie) of Houston, TX, and Douglas Lamando (Judy) of Landisville, NJ. His step grandchildren; Anita Rambarose (Michael), Toni Nakvapil (Ed), Larry Sniffen Jr. (Karen), Michael Sniffen (Elyse), Brian Sniffen (Katy), Timothy Lamando (Becky), Justin Lamando (Renee), David Lamando, Daniel Lamando, Krista Lamando and 18 great grandchildren. He was predeceased by his first wife Geneva, his brothers Art Sargent and Eugene Sargent, his sister Gladys Cuba, plus his second wife Rita Sargent. Visitation will be held from 2pm to 4pm on Saturday, February 5th at Martinez-Morse Funeral Home, 33 Railroad Avenue, Middletown, NY. Burial will take place at Hillside Cemetery, Middletown, NY at a future date.

George Sargent of the Town of Greenville, NY, passed away on Tuesday, February 1, 2022, from a short bout with Covid. He&#8217;d just turned 89 years old. He was the son of the late Andrew Sargent and Amelia MacWilliams and was born in Middletown,... View Obituary & Service Information

The family of George Sargent created this Life Tributes page to make it easy to share your memories.

George Sargent of the Town of Greenville, NY, passed away on...

Send flowers to the Sargent family.