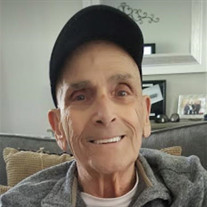 Fred J. DeCosta (Freddie), 88 of Middletown, New York, passed away on December 15th at the Kaplan Family Hospice Residence surrounded by his family. Fred was born in Mount Pleasant, NY to Jack DeCosta and Lisa Mastroddi. He served in the United States Navy during the Korean War as a sailor on the U.S.S Coral Sea. He was a lifelong fan of the New York Yankees, and enjoyed attending games each year. Fred truly loved being a father and spending time with his children, and was a permanent fixture at their sporting events at Minisink Valley High School. Fred also loved the time that he was able to spend with his three grandchildren, especially his granddaughter Mia Grace Solan, whom he was able to spend the most time with. Fred was also a past member of the Knights of Columbus and Holy Name Church in Otisville, NY. Fred is survived by his wife Pamela DeCosta of Middletown, NY, daughter Tanya Solan and husband Adam of Middletown, NY, son Patrick DeCosta and wife Bonnie of Middletown, NY, three grandchildren; Mia Grace Solan, Dominic Solan and Rowan DeCosta. Fred is also survived by multiple nieces and nephews. He was predeceased by his three sisters Anna, Jean and Helen. A Visitation will be held at Martinez-Morse Funeral Home, located at 33 Railroad Avenue in Middletown, NY on Wednesday December 19th from 1pm-3pm and 6pm-9pm. Father Michael Palazzo of Holy Name of Jesus Church in Otisville, NY will conduct a funeral service at 8:30pm.. Memorial donations may be made to Hospice of Orange and Sullivan, 800 Stony Brook Court, Newburgh, NY 12550. The family wishes to extend gratitude to all those who helped to care for Fred and support his family in his last few years. Arrangements are under the direction of Martinez-Morse Funeral Home 33 Railroad Ave Middletown, NY 10940 845-343-6918 Messages of condolence can be left for the family at www.morsefuneralhome.com.

Fred J. DeCosta (Freddie), 88 of Middletown, New York, passed away on December 15th at the Kaplan Family Hospice Residence surrounded by his family. Fred was born in Mount Pleasant, NY to Jack DeCosta and Lisa Mastroddi. He served in the United... View Obituary & Service Information

The family of Mr. Fred J. DeCosta created this Life Tributes page to make it easy to share your memories.

Send flowers to the DeCosta family.