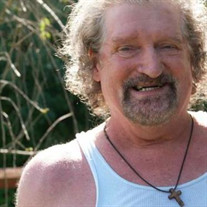 "Dave" was born to (in Paterson NJ) and predeceased by Bessie Jean and George Robert Scherer. He leaves behind: his wife of six years; Danni, his 4 beloved pets (2 dogs, 2 cats), brother and sister-in-law; charlie & Sue Kolaritsch, their two daughters Ashley & Cheyenna, aunts, uncles, cousins, and many friends (some of whom were family to him). As a young child, he joined the Boy Scouts where he thrived and became a star scout. Sparks were ignited when he discovered a set of old drums in his parents attic. Some pieces were missing, so he improvised and made them out of household items. He even included an air horn for some excitement. His creativity was already aflame! They, quickly became his most natural form of expression and when his mother suddenly passed, his greatest release. Bessie was his world. And he had to face his teenage years without her. As people sometimes do, his father eventually remarried. Through this union, he acquired his brother. Dave was elated to finally have a sibling. In his sophomore year of high school, he joined the drum & bugle corps. After graduating in 1967, he entered into the United States Navy. He continued to play in the Drum & Bugle Corps at boot camp and even became the captain. He rewrote all of their music and upon graduation, received a full standing ovation. He went on to serve in Vietnam and worked as a radar man. When he returned home, he worked for IBM and Panasonic; performing various programming and repair jobs throughout the country. At one point, he devised and conducted a major study for OCEA. One that involved the way particles consume and affect space. As prestigious as this lifestyle was, it was not for him. He preferred to be home with his family, friends, drums, and Volkswagen Bug. And so, in complete contrast with his history, he became and remained a welder for 20 years. When he realized he needed a job with a better retirement package, he began taking classes at SunyOrange. In 2005, he graduated Summa Cum Laude with an Associates in computer science. This enabled him to have a career as a senior systems analyst at Orange & Rockland. He worked there for fifteen years before comfortably retiring. Within a couple of years of leaving the workforce, NY state began losing its appeal to him. However, he nor his wife wanted to travel too far from those who meant the most, family and close friends. Chief among them, was Brian Dougherty and Louis Massaro. Not only did he take pride in their extraordinary musicianship, but he also valued them as family. In the late 1980's, they along with Frank Beeson and Rich Deyoung engaged crowds (as The Tunnel Flounders) with classic rocks alluring vibes. Equally close to his heart was Ric Skinner, an exceptionally talented writer and guitarist. In the late 1990's before Rics inception of Lot 14, Dave joined forces with him and a conglomerate of others. In time, they became a smaller and more refined group. Among it was Phil Santiago, and Dan Rogers; two more people Dave truly cherished. In addition to classic rock, they also played Rics eclectic originals. Dave loved them, particularly "Midnight Lady." Although Dave never stopped appreciating rock, he developed an intense passion for Jazz . And so, his heart took him to New York citys Harbor conservatory. There, he received instruction from master percussionists, most notably Joe Morello and Jose Madera. From 1993-2010, he studied drums and percussion in the Drummers Collective "Sounds Of Joy" Jazz workshop. There, he met and formed "Short Memory" with David Aaron and Brent Butterworth (1997). Together, they created their version of Alanis Morissettes "You ought to know" and gained national airtime for it. As life sometimes goes, Dave developed a health issue that required his attention and had to withdraw from the band. He maintained close relations with Aaron and even spoke to him just days before he passed. In spite of his circumstances, his spirits remained high and he even shared a few laughs. His spirit will live on just as Short Memory does. It will also live on through SunyOranges Jazz Ensemble where he eagerly participated. His skills and knowledge stood out for his final performance, "Milestones." Some may say it takes practice. But for him, manipulating sound came naturally. In just three whirls at it, he had it figured out. He was truly an incredibly talented percussionist. His deep knowledge enabled him not only to play various genres, but also to fuse them together; most recently in Latin Jazz. The rhythms beat in harmony with his charm. It was a true love for him. But then again, so was straight ahead Jazz. He loved it in its purest form, but also for the affects of improvisation. It resonated in his content expression as he played. It was evident through his devotion to the Jazz ensemble and his encouragement to its younger musicians. Nothing would make him more happy than knowing they continued to receive encouragement in his honor. In lieu of flowers, donations can be made to the SUNY Orange Foundation in support of the SUNY Orange Music Department. Checks can be made out to SUNY Orange Foundation Music Department Fund and mailed to SUNY Orange Foundation, 115 South Street, Middletown, NY 10940. Donations can also be made online at http://www.sunyorangefoundation.org/make-a-gift-now." A memorial service to celebrate Daves life will be held when the Covid-19 virus will no longer be such a threat.

"Dave" was born to (in Paterson NJ) and predeceased by Bessie Jean and George Robert Scherer. He leaves behind: his wife of six years; Danni, his 4 beloved pets (2 dogs, 2 cats), brother and sister-in-law; charlie & Sue Kolaritsch, their two... View Obituary & Service Information

The family of Mr. David H Scherer created this Life Tributes page to make it easy to share your memories.

&quot;Dave&quot; was born to (in Paterson NJ) and predeceased by Bessie...

Send flowers to the Scherer family.