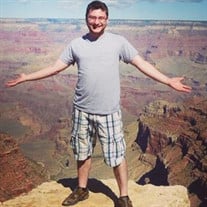 Christopher Howard Moore of Middletown, NY passed away March 2nd, 2017. He was just 33 years old. He was born October 11,1983 in Middletown, NY. Christopher was a graduate of Pine Bush High School in 2000. He worked successfully in sales and banking before moving on to earn an honorable job as a NYS Corrections Officer: a job he truly loved. He was known for his quick wit and hilarious sense of humor that drew everyone in, and his contagious smile that lit every room. He had an uncanny ability to tell jokes and stories that would attract everyone’s attention and result in a room full of laughter. Christopher was a wonderful and loving father to his two beautiful children, Amber Marie, 11 and Westin Nicholas, 5. Along with his children, Christopher is survived by his loving parents Catherine Boyd and Paul Moore, his step-father James Boyd, his maternal grandmother Sally Moore, his sisters Jesse Dubois and Emily Moore, his brother-in-law Tyler Dubois, his step brothers Danny and Jimmy Boyd and his sister-in-law, Christina. Christopher was also an amazing and loving “Uncle Ta” to Grace, Abigail, Ethan, Jackson and Nathan whom he loved immensely. He will be deeply missed by all aunts, uncles, cousins, friends and his coworkers as well. Christopher was predeceased by his maternal Grandfather and Grandmother Howard G. Laidlaw Jr. and Evelyn Goodman and his Paternal Grandfather Bruce Moore. He will only be remembered for the beautiful life he lived, the lives he touched, his captivating personality and the happiness he brought to all around him. An interment will be held on Sunday March 12, 2017 at the Bloomingburg Rural Cemetery at 10:30am. Immediately following, there will be a celebration of Christopher’s life at the Town of Crawford Community Center located at 115 State Route 302 in Pine Bush. Family, close friends and coworkers (past and present) are welcome to attend. The family sincerely wishes to thank Chris Martinez of Dewitt-Martinez funeral home in Pine Bush for the genuine kindness and compassion he showed Christopher and his family during such a painful time. In lieu of flowers, donations can be made in Christopher’s name to The American Foundation for Suicide Prevention (AFSP) 120 Wall Street, 29th Floor, New York, NY 10005.

Christopher Howard Moore of Middletown, NY passed away March 2nd, 2017. He was just 33 years old. He was born October 11,1983 in Middletown, NY. Christopher was a graduate of Pine Bush High School in 2000. He worked successfully in sales... View Obituary & Service Information

The family of Mr. Christopher Howard Moore created this Life Tributes page to make it easy to share your memories.

Send flowers to the Moore family.