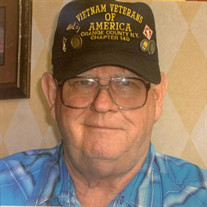 Middletown, NY Burton Ezra Irwin, Jr. Burton Ezra Irwin, Jr., 74, of Middletown, NY passed away Sunday, October 25th, at Garnet Health Medical Center in Wallkill, NY. Burton was born in Middletown, NY on December 30, 1945, a son of the late Geraldine (Worden) and Burton Ezra Irwin, Sr. Burton married his sweetheart Mary, and enjoyed a loving marriage of 41 years. He served in Vietnam as an Earth-moving heavy equipment operator for the US Army. He was involved in the Middletown VFW 692 and he enjoyed all the various Army reunions, Platoon 46, which took place all over the country. Burton used his GI Bill to learn how to drive an 18-wheeler the right way. He retired in 2006 after 34 years of driving liquid petroleum product trucks and received a Safety Award. He was an avid stock car driver and Nascar Fan. He drove race cars, volunteer ambulances, and tow trucks at the local speedway. After retiring from racing he drove a push buggy and tow truck every Saturday night. As a retiree, he enjoyed life and had a lot of fun! He would camp, travel, fish and enjoyed being a snowbird. You would often see his dogs Chewy and Mr. Munch with him on his outdoor adventures. To all his Vietnam Veterans, he wanted to say: "Welcome Home my brothers and sisters! We remember our comrades who served and didn't come home. Thank you for your service"! Burton is survived by his daughter Christine Irwin Dawson of Michigan, 3 grand-daughters and 2 great-grand daughters, brothers Bruce Irwin Sr. of Arizona, brother John Irwin of Delaware, sister Laurie Strenkert of Port Jervis, sister Sandra Ryan and his sidekick (Nephew), "Bubba", Jason Little, Middletown, NY and many nieces and nephews. Burton is predeceased by his wife Mary (Roache), and sister Georgianna Laplant. A celebration of life will be held on Friday, October 30th at Martinez-Morse Funeral Home, 33 Railroad Ave., Middletown, NY from 2pm-4pm & 6pm-8pm. Burial of Ashes will follow at the families convenience at Orange County Veterans Memorial Park in Goshen, NY. Messages of condolences may be left at www.DeWittFH.com

The family of Burton Ezra Irwin Jr. created this Life Tributes page to make it easy to share your memories.

Send flowers to the Irwin family.