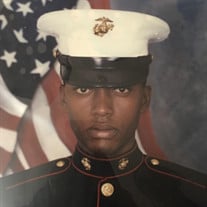 Bernard Terrence Clarke, at the age of 55 passed away on Tuesday morning on January 29, 2019 at Orange Regional Medical Center, Middletown, New York, in the company of his devoted wife Maxine Clarke. He was born on June 21, 1963, to the late Dorothy Louise (Locke) Clarke and Terrence Augustus Clarke in Belize City, Belize. Bernard graduated from Wesley Methodist High School, after which he attended Belize Technical College. After graduating Belize Technical College he moved to Brooklyn, New York to be with his family. In October of 1985, Bernard enlisted in the United States Marines. He married his wife Maxine on April 4th 1988. While enlisted with the Marines, he traveled the world and resided in Germany, Japan, Virginia, North Carolina and New York. He served in combat in several places including Afghanistan and Iraq. After 24 years of military service, on December 31, 2009, Master Gunnery Sergeant Clarke retired from United States Marines. As an individual who lived his life with purpose, he pursued a second career as Director of Admissions for Lincoln Technical Institute in Queens, NY. He was a gentle, humble, loving man with the greatest sense of humor. Bernard is survived by his wife of 31 years Maxine Clarke, son Keenan Clarke, daughters Kaimara Clarke and Cherelle Rivera, father Terrence, sister Jessie Clarke Lande, brothers Desmond, Norman, Evan and Bruce, nieces Tanima Lee, Anazette Ray and Shakira, nephews Troy, TC, Jacob and Ruben, uncles Kenneth and Melvin Locke, aunt Alice Locke and several cousins. He was pre-deceased by his sister Ruth Clarke and brother Colville “Poppy” Clarke. On Wednesday, February 6, 2019, the family will receive friends from 10:00-11:00 am for a viewing of the body at St. Paul’s Methodist Church, 3714 Avenue D, Brooklyn, New York. The funeral service will commence at 11:00 am. Immediately after the service, the body will be carried to the Calverton National Cemetery (Veteran’s Cemetery) for a graveside service and interment. Please visit www.morsefuneralhome.com to share memories and words of comfort and view the memorial tribute.

Bernard Terrence Clarke, at the age of 55 passed away on Tuesday morning on January 29, 2019 at Orange Regional Medical Center, Middletown, New York, in the company of his devoted wife Maxine Clarke. He was born on June 21, 1963, to the late... View Obituary & Service Information

The family of Mr. Bernard Terrance Clarke created this Life Tributes page to make it easy to share your memories.

Bernard Terrence Clarke, at the age of 55 passed away on Tuesday...

Send flowers to the Clarke family.