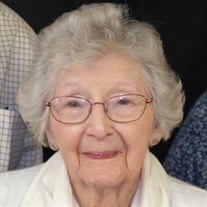 Jane Atalie (Atalie) Barnett Lebedeff was born on May 14, 1917, the only child of Bertha Jane Meese Barnett and Arthur Herrick Barnett, both deceased. She was a life-long resident of Joplin, Mo, until the 2011 tornado destroyed her home. She then moved to Westtown, NY, to live with her daughter, Carla Boyer, and her son-in-law, Don Boyer. Atalie graduated from Joplin High School, studied 2 years at Texas Women’s College, Denton, TX, and earned a B.A. from University of Miami, Coral Gables, FL. She earned an M.E. from the University of Arkansas, Fayetteville, AR, and an M.A. in Spanish, also from the University of Arkansas. She and her husband, William (Bill) J. Lebedeff, both taught in the Joplin School System until their retirement in 1977. She especially enjoyed reading, listing to classical music, Jeopardy! involvement in First Community Church, Joplin, golfing with her husband, and travel. Some of the trips were to watch races in Hot Springs, AR, and Saratoga Springs, NY. She was devoted to her daily scripture study. Atalie attended Grace Episcopal Church with her daughter and son-in-law until she was physically unable to do so. She supported the Guild of St. Margaret Soup Kitchen and Episcopal Charities, among other organizations. She had a sharp mind and a generous spirit which she shared freely with her new church family, as well as her new home. Since August 2021, she was cared for at home by Hospice of Orange and Sullivan Counties and enjoyed knowing the many caregivers who worked with her, bidding them goodbye each time with “Love you!”. She died peacefully on Easter morning at the Kaplan Family Hospice residence with Carla and Don in attendance. She is survived by her daughter and son-in-law, a very beloved niece, Geraldine Tilker of Etobicoke, ON, a grandniece and grandnephew and great grandniece, also in Ontario, and many cousins in Oklahoma, and Missouri. In lieu of flowers, donations may be made to Guild of St. Margaret Soup Kitchen, Middletown; Hospice of Orange and Sullivan Counties; or the ASPCA. Services will be held at Grace Episcopal Church, 58 North Street, Middletown, NY, on May 14, 2022, at 10:30 a.m., Fr. Victor Sarrazin presiding.

Jane Atalie (Atalie) Barnett Lebedeff was born on May 14, 1917, the only child of Bertha Jane Meese Barnett and Arthur Herrick Barnett, both deceased. She was a life-long resident of Joplin, Mo, until the 2011 tornado destroyed her home. She... View Obituary & Service Information

The family of Atalie B. Lebedeff created this Life Tributes page to make it easy to share your memories.

Send flowers to the Lebedeff family.