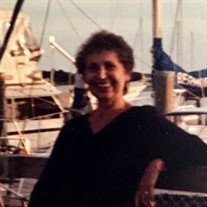 Anna Barbone Smith, age 99, passed away peacefully from renal failure on July 29, 2020 at Kaplan Family Hospice Residence in Newburgh, NY. Beloved daughter, wife, mother, teacher, colleague, and friend, she lived a rich and vibrant century-long life, touching all who knew her with her sense of humor, kindness, vivacity, and grace. She was predeceased by her first husband of three years, James F. McCormick, and her second husband of 42 years and father of her children, Gardner L. Smith. Anna is survived by her son, Alex Smith and his wife, Lisa, of Middletown, New York, and daughter, Maria Smith, who resides in Chapel Hill, North Carolina. Anna was born in Middletown, NY, on December 5, 1920, to Giuseppe Barbone and Maria Petrosillo Barbone, both of Monopoli, Italy. At the age of ten, her parents took her to Italy for one year, a sojourn that made a lasting impression on her. Anna's Italian heritage and devotion to family were driving forces in her life. She travelled frequently to Italy with her daughter, Maria, visiting relatives and immersing herself in the language, music, and culture of her parents' birthplace. She loved to speak and hear the Pugliese dialect that she had learned as a child, enjoying its rich humor and expressiveness. Blackie, as she was known to her friends throughout high school, college, and beyond, graduated with a B.S. in Chemistry from St. Lawrence University in Canton, NY, in 1942. Like most of her generation, her life was profoundly affected by the events of World War II. Contributing to the war effort, she took a job at the Westinghouse Plant in New Jersey––the only female chemist in her laboratory unit at that time. In 1943, she married James F. McCormick, whom she had met at St. Lawrence, and moved with him to South Texas. A pilot with the U.S. Army Air Force, Captain McCormick was killed during active duty in 1946. On January 1, 1950, Anna married Gardner L. Smith of Halifax, Nova Scotia, a colonel in the Royal Canadian Air Force and decorated fighter pilot during WWII. Anna and Gardner, whom she called the rock of her life, settled in Middletown to raise their two children. While devoting most of her time to family life, Anna also directed her talents and energies to music and teaching. An accomplished classical pianist, she gave private lessons, conducted school plays and recitals, and sang in her church choir. She taught the fifth grade at St. Joseph's Catholic School for 14 years, until her growing hearing loss forced her to retire from the classroom; she also served as a volunteer literacy tutor at Thrall Library. Forthright and staunch in her progressive views, Anna was actively engaged in the political and social transformations of the 1960s and 70s. Beyond her greatest loves of opera and singing, Anna's passions and pastimes included travelling, walking, swimming, reading, and enjoying the company of many friends and relatives. Her beloved husband, Gardner, passed away in August 1992, and Anna remained strong and independent for the rest of her life. Anna Smith is my adored mother and closest friend, whose loss is immense and profound, but whose strength, joyful spirit, and guidance will accompany me throughout the rest of my life. Both my brother and I are grateful to have had our wonderful mother for so many years, and to have had the privilege of caring for her in her advanced age. We wish to thank the home care aides from WillCare, First Choice Senior Services, and Community, the staff at Kaplan Family Hospice Residence, and Dr. Douglas Fletcher and his staff for their kind support.

The family of Anna Barbone Smith created this Life Tributes page to make it easy to share your memories.

Send flowers to the Smith family.